In the land of Aram (Syria in Greek) there lived a valiant soldier highly regarded by the king and was the commander of his forces. The Lord had brought victory to Aram through this man. His name was Naaman. He had a perfect life, respected in his community and feared amongst his enemies. However with his great wealth he also had an incurable disease – Leprosy, the disease which caused one to be shunned from society and live as an outcast.

Historians believe that at the time when Naaman was the commander of Syria, the king would have been Ben-hadad and in many quarters it is believed that the king of Israel was Joram[1]. During those days the relations between Israel and Aram were extremely fragile. War and Raids were as common as change in weather and maybe as frequent too.

Now bands from Aram had gone out and had taken captive a young girl from Israel, and she served Naaman’s wife. – 2 Kings 5:2

The young girl was captured from Israel in one of the raids and served Naaman’s wife. This girl had great compassion for her master and she let her mistress know about prophet Elisha in her homeland and his exploits. I still struggle to understand why a prisoner in a foreign land would help her master. Maybe she was treated nicely in the house of Naaman and she wanted to return the favor or maybe she had found salvation in one of her encounters with the Man of God[2] and she shared great love and compassion, even for the ones who treated her as a slave. Naaman was willing to try anything. He was a reputable man and did not want to live with this ostracizing disease. He went to the king and requested his permission to go to Israel to meet this prophet.

“By all means, go,” the king of Aram replied. “I will send a letter to the king of Israel.” So Naaman left, taking with him ten talents of silver, six thousand shekels of gold and ten sets of clothing. – 2 Kings 5:5

The two nations would have had a temporary treaty at this point as the king let Naaman enter enemy territory without fearing for his soldier’s life. He even writes a letter to the king of Israel making clear Naaman’s intention as he entered their land.

As soon as the king of Israel read the letter, he tore his robes and said, “Am I God? Can I kill and bring back to life? Why does this fellow send someone to me to be cured of his leprosy? See how he is trying to pick a quarrel with me!” – 2nd Kings 5:7

Even with all the precautionary steps taken by Ben Hadad (Syrian King) the king of Israel misunderstands his intentions and sees this as the beginning of another onslaught on his kingdom. Such were the fragile relations between the two nations. In fact in the very next chapter we read Ben Hadad gathered his troops to invade Samaria – the capital of Israel. We also know that the slave girl was a recent raid’s captive. This shows how frequent war erupted between the two nations and justified to some extent the king’s fears on reading the letter. Elisha got to know about the dilemma the king was in and asked him to send Naaman to him.

When Naaman arrives at his doorstep Elisha didn’t even bother to greet him rather simply sent a messenger to Naaman saying go wash yourself in the river Jordan. This showed utter disrespect and that too for a commander of an opposing army and at this point pride takes over Naaman.

But Naaman went away angry and said, “I thought that he would surely come out to me and stand and call on the name of the LORD his God, wave his hand over the spot and cure me of my leprosy. Are not Abana and Pharpar, the rivers of Damascus, better than any of the waters of Israel? Couldn’t I wash in them and be cleansed?” So he turned and went off in a rage. – 2nd Kings 5:11-12

Naaman expected a grand gesture and wanted to receive healing in a spectacular form not to bathe in a dirty river .Naaman rather wanted to dip in the rivers of Damascus (capital of Syria) as they were cleaner and closer to his home.

(Abana and Pharpar were the names given to two rivers that flowed through or near Damascus the capital of Syria. The Abana River system was the more prominent of the two; originating in the mountains northwest of Damascus, it divided into streams that flowed through, and on each side of, the city – thereby providing a source of life and flourishing vegetation. The Greeks called it Chrysorrhoas, which meant golden stream. The Pharpar River flowed into the marshy lake east of Damascus, thereby also providing a source of lush fertility in an otherwise dry region.[3])

How often our Pride gets in the way of our salvation. We fail to leave our comfort zone and then later question God that why he hasn’t delivered us. Lot can be learned from the widow in 2nd Kings Chapter 4. The poor widow had blind faith. When Elisha told her to gather all the jars she could find and start pouring the little oil she had into all of them she obeyed without giving it a second thought and could live off the proceeds that she got from selling the oil. My friend is a youth leader in his church and is frequently in-charge of arranging revival meetings in his town. I asked him that how does he manage to amass funds for these events in such a short period. He answered that even on the eve of the event they usually muster up five percent of the required funds but somehow someway after the event finishes they have funds leftover. He does not know how this happens each time, nor does he question it. But on the onset of each event he believes God will pull through and provide all their needs.

God calls us to have such Blind faith. Just like a kid who jumps in his father’s arms trusting with all his heart his father will surely catch him. God keeps giving us chances to prove our faith is strong in him. Naaman got a second chance and fortunately for him his servants convinced him to dip in Jordan. Maybe these servants were also Israelites, captives from a recent war, and knew how powerful the words of this ‘Man of God’ were. 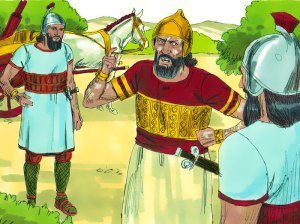 However, after receiving healing from an incurable disease, Naaman was unable to credit it to his Faith, rather he thought of Samaria and The River Jordan as holy land and the reason for his healing. He carries soil from Samaria back to Aram and hoped that worshipping the idol would bring him and his family furthermore healing. Even after receiving healing we credit our healing to medicine or doctor’s advice and fail to acknowledge the real reason for our healing.

Our minds have a tendency to attach a valid reasoning to everything that occurs in our lives. This is the biggest roadblock on our route to attain salvation. God wants us to take that leap of faith and put all our trust in him that he will deliver us from whatever we are going through.

[2] Elisha was commonly known by people as Man of God