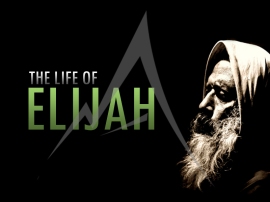 Elijah lived in difficult times when Israel was in spiritual deterioration.The secret of his success was prayer. Elijah was used to turning the hearts of the people back to the Lord (I Kings 18:37). But what was so special about him? James reminds us that he was a man of passions like us, but he prayed.(James 5:17). James, the Lord’s half brother, was nicknamed “Camel Knees” because of the calluses that developed on his knees from long hours in prayer. Over 14 verses in James are devoted specifically to prayer or principles of prayer.

Why Pray?: The promise God made to him in I Kings 18:1. But why pray? God had said, “rain is coming.” In Matthew 6:32, while warning the disciples against misplaced priorities and being anxious over elementary requirements, the Lord said, “for your heavenly Father knows that you need all these things.” If He knows and cares and has promised to meet all our needs according to His riches in glory, then why pray at all? Prayer is the human tool of faith that God has sovereignly chosen to act. God not only ordains the end, i.e. the rain, but He also ordains the means of making the promise a reality through prayer.

The Preparation before his prayer (IKings18:30-32)

Self examination: Repairing the Lord’s altar depicts coming to the Lord on His terms with confession and  repentance, and restoring the areas of access we have neglected as had been the case–not with Elijah–but with Israel. For God to hear our prayer, we need to repair or correct those things in our lives that hinder fellowship with Him.

If we confess our sins, he is faithful and just and will forgive us our sins and purify us from all unrighteousness. – 1 John 1:9

Scriptural: The time of his prayer was the time of the evening sacrifice as prescribed by the Old Testament. The place where he offered his prayer was near the altar where the bullock lay. Elijah was acting according to the revelation of the Lord in the Old Testament Scripture. What can we learn from Elijah’s actions? There is no access to God and thus no prayer heard apart from God’s prescribed sacrifice and access. “That I have done all these things at Thy Word.” As God’s servants, our lives are to be ordered and directed by the Word of God.

Fervent prayer: This simply shows us Elijah prayed earnestly or fervently (James 5:17).He was not merely being religious nor was he trying to impress God by falling on his knees. A number of postures are seen used in Scripture for prayer–standing, kneeling, prostrate, the hands raised, etc. It’s not the posture that counts. It’s the heart, the attitude, the motives, the faith, and the nature of the prayer according to the will of God. Believers are not commanded to assume any special position.

Perseverance: This also shows that Elijah prayed in faith, expectantly. He prayed believing God’s specific promises and with perseverance he continued in prayer.“Seven times” he told the servant to return. Keep going until we see the evidence of an answer. Double-minded man of James 1:5-8, questions, doubts and wavers in his decisions. Elijah did not doubt even after six negative reports. He continued to pray. For Elijah,the little cloud was just the start of something big.

Restoration: We see people turning back to the Lord. We see revival, restoration, and repentance. In vs 45 the drought was broken. But the ultimate goal was the removal of the spiritual drought in Israel. The Lord often waits to answer our prayers for physical needs in order to deal with our spiritual needs.