It was a typical day in the life of Peter and John as they went up to the temple to offer prayers. At the gates of the temple a crippled beggar asked for alms from them. “Silver or gold I do not have, but what I have I give you. In the name of Jesus Christ of Nazareth, walk.” As soon Peter spoke these words the beggar jumped to his feet and walked. Now the onlookers were amazed at what they saw as they had seen the crippled beggar every day. Seeing their amazement Peter wasted no time in telling them about The Good News.

How often has this happened to us? God provided us with an opportunity to tell someone about his Grace and we neglected it because it was perhaps inconvenient or awkward. The Bible also mentions similar traits in the people whom God chose. Still He gave them chance after chance to glorify His name.

One such character is Jonah. God wanted Jonah to proclaim The Word in Nineveh, as their evil works were at a high. Instead Jonah boarded a boat for Tarshish, which was in the opposite direction of the city of Nineveh. God’s anger caused the sailors on the boat to toss Jonah out of the boat. But God had mercy on Jonah and gave him another chance to preach His Word to the dying souls of Nineveh.

Another person that comes to mind when I think of wasted opportunities is King Solomon, who was chosen to lead Israel after his father’s death. Not even his brothers thought that Solomon would be chosen over them. But God chose Solomon and blessed him with abundance of wisdom and wealth. The wisest man who ever walked the earth wasted this gift, that God gave to him so that he might lead Israel according to His will, but instead he used his wisdom to amass wealth and fulfill his desires of greed and lust. God waited on Solomon to turn his ways but to no avail, and finally tore his kingdom from him.

Moses was called by god to lead the Israelites out of the bondages of the Egyptians. (Ex 3: 7-10) He was placed in a perfect place to do so, The Pharaoh’s Palace, yet he wasted this opportunity because he could not control his temper and had to live in exile for forty years. God called him and said, “Lead my people out of Egypt” to which Moses was reluctant due to his fears about his speech impairment, but God gave him a companion in his brother Aaron and gave Moses the wisdom to lead Israel.

These three men have one thing in common, they wasted their chances but God kept giving them new ones and in the end all three have different endings depending on how they utilized The Second Chance. One saved the city of Nineveh from being destroyed, one king was stripped of his kingdom and the other led Israel towards the promise land. I’m sure we can relate to these men in some way or the other. Hesitancy, being preoccupied with worldly affairs and ignorance in reluctance that we miss God’s calling for us. We are like the ant which a little boy keeps pushing toward the sugar cube, but due to its fear and unbelief it keeps running away from the boy’s finger.

The Acts of the Apostles is all about making full use of every opportunity. Like Peter in our reading uses healing to proclaim The Word. Like the martyr Stephen, who after being seized, found it as an opportunity to proclaim the Good News to a crowd that under normal circumstances would not even listen to him, and like Paul who uses his trial and his prison sentence to strengthen the faith of many churches.

So then, as we have opportunity, let us work that which is good toward all men, and especially toward them that are of the household of the faith.   (Gal 6:10) 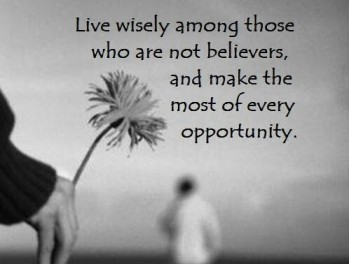